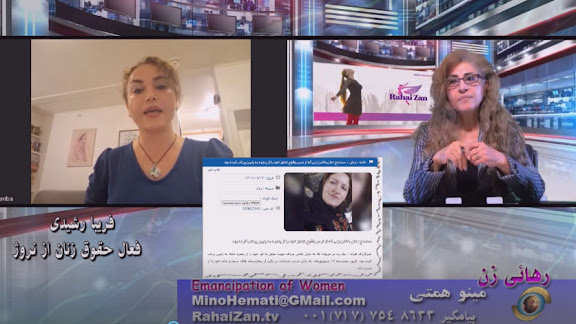 در برنامه امشب به مرگ اجتناب پذیر شلیر و گستره اعتراضات مردم مریوان و سنندج به زن ستیزی حاکم و دادخواهی شلیر خواهیم پرداخت. فریبا رشیدی فعال حقوق زنان میهمان برنامه امشب، خود از نزدیک با زن ستیزی حاکم دست و پنجه نرم کرده است
The Islamic Regime of Iran's violation of women's rights encourages those who violate women, the death of Shalier Rasouli is yet another proof.
The unfortunate news of the untimely death of 36-year-old Shlier Rasouli, a mother of two children, aches the heart of every conscientious person from various aspects. When Schlier falls into the trap of a man trying to rape her, she commits suicide by jumping from the top of the building and despite the efforts of the doctors, her life is shortened after a few days. If we want to line up the accused in the order of their role in this tragedy and try them in the court of human conscience, the position of this male aggressor will be at the end of the long line of misogynistic criminals.
The Mullahs of the Islamic Jahliah Hozas (Islamic clerk school of ignorance) are the first-line defendants of this court, who provide the ground for the growth and development of these anti-human thoughts, methods and behavior by propagating and promoting misogynistic rules and traditions.
The defendants of the second tier are all the Islamic living laws, including the "educated" and the Mullas, and the judicial institutions of the Islamic caliphate ruling the country.
The defendants of the third tier are the security forces who consider it their main duty to protect the safety of criminals, aggressors, and embezzlers, and do not value the safety of citizens, especially the women.
The defendants of the fourth row, we are the people who at the beginning of the 21st century are still not able to bury, at least in our homes, the culture of patriarchy and misogyny, this stinking traditional and Islamic heritage, and prevent its reproduction, and deliver freedom-loving and equality-seeking people.
The accused in the last row are shameless individuals who commit these criminal acts.
In tonight's program, we will discuss the inevitable death of Shalier and the extent of the protests of the people of Marivan and Sanandaj against the ruling misogyny and seeking justice for Shalier's attacker. Women's rights activist Fariba Rashidi, the guest of tonight's program, has personally dealt with the prevailing misogyny.
Rahai Zan TV (Emancipation of Women TV, a weekly TV program broadcasting via satellite since October 2004 from Los Angeles, Channel One TV (in Farsi) to viewers in North America, Europe, Middle East and Far East. The program Centers on women's rights issues, in defense of defenseless victims of Islamic penal law, women condemned to stoning or other cruel punishment.