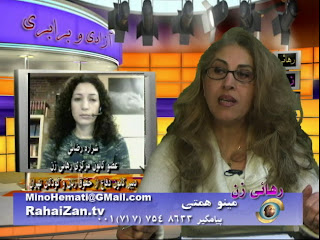 Excerpt of a Television interview  with Sharareh Rezaei, the secretary of Association for the Defence of  Women and Children Rights-TEHRAN, and a member of the leadership of The Organization for Emancipation of Women (OEW) and the Editor of the OEW Journal. The interview was conducted by Mino Hemati, the director of the OEW and the producer and presenter of OEW TV.

Some of these new Sharia based laws were:
- Gender segregation in schools, buses and Universities
- Abolishment of the right of women to divorce and children’s custody
- Women’s share of inheritance were reduced to that of half of men
- Women’s testimony before the court of law was downgraded to that of half of men
- Age of marriage for girls was lowered to 9 years of age.
- Polygamy and temporary marriage were legalised
- Men were given the right to physically and mentally punish their wives for disobeying them!
- Honour killings were tolerated and encouraged
- Stoning women to death were introduced and exercised

The above are just a sample of anti-women laws that were adopted and implemented by the Islamic regime.

The introduction of these laws further increased anti-women views and practices in the society. Backward and male chauvinist attitudes gained currency.

Women found to be flouting the sharia laws have been subjected to severest punishment including torture, imprisonment and stoning.

Mino Hemati: What are the effects and consequences of such misogynist laws?
Sharareh Rezaei: - In while the number of girls in higher education is higher than boys, nevertheless the number of women in employment is only 11% of that of men. The introduction of Islamic based laws has led to a dramatic increase in divorce; prostitution; temporary marriage (Seigheh – legal prostitution) as well as increase in polygamy, honour related violence and an increase in the number of children being born outside the wedlock.

A large number of women and girls have been expelled from their work places, universities and schools for violating strict Islamic dress code.

All these mistreatments and discriminations have been institutionalise and led to a total humiliation and degradation of women.

Mino Hemati: What has been the reaction among women and especially women's rights activists to women situation in ?
Sharareh Rezaei: Don’t be surprised if I say the struggle and opposition to sexual apartheid  and discrimination has not stopped even  for one day. Women and girls constantly and on daily basis challenge “hijab”.  They take on the authorities at every opportunity knowing full well that such actions will carry retribution on the part of the security forces not only against them but also their families will be implicated.

Many of the women’s rights activists are still in prison. A number of activists fearing for their lives have been forced to flee the country.

The protest and opposition against these laws are as old as the Islamic Republic. In 1980 more than 100,000 people took to the street in protest against the imposition of compulsory hijab.  In recent years a number of high profile gatherings and protests have taken place in front of and “” ,  all against family laws and all its misogynist and anti-women implications and against suppression of women.

Every year on the occasion of March 8th, a number of gatherings and events are organised despite all the intimidation, assault and arrest of the organisers and participants.  Women activists also mark November 25th, the international day against violence against women by organising meetings, conferences and gatherings.

Mino Hemati: At the end of the interview do you have any messages for our viewers?

Sharareh Rezaei: I would like to say that in a society struck by sexual apartheid we all are victims. We are all being subjected to oppression and degradation just because we are women. Our suffering is indiscriminate. We all suffer and this calls for a collective response.

We need to call on the international public opinion and make them aware that the Islamic inspired sexual apartheid is not any less abhorrent than racial apartheid that was universally condemned.  We must let the world know that the emancipation of women in is part and parcel of human liberation and its progress. Struggle against the Islamic Republic should be through siding and supporting women’s and workers movements in and not through economic sanctions and military assault on by US and .
Posted by RahaiZan.Org at 12:03 AM