Posted by RahaiZanTV at 9:38 PM No comments:

English transcript of this interview was contributed by Said Mohammadi, which we are grateful for his cooperation with us.


it has been more than 4 years that the honorable and conscious teacher Farzad Kamangar is still imprisoned
by the Islamic regime under difficult conditions, and the risk of execution,
even though it has been proven that the accusations against him are baseless and false
I have a conversation with Farzad Kamangar's mother Mrs. Saltaneh Rezaee
thank you very much
yes, as you said Farzad Kamangar has been teaching in Kamyaran and the villages
Farzad is a respected member of the family, has a mother of 70 years ,
has supported many orphans
now it has been 4 years that he is under this verdict
I firstly ask the mothers to attempt hand in hand to bring our children back to ourselves,
then my government, my president and my leader, if he claims to be an Islamic leader,
a leader is a person who doesn't lose his people (their support)
shouldn't oppress his nation, a president should take care of his people
not to betray them, not to execute the youth
I ask them and all those who hear my voice, give our children back to us
don't torture us anymore
I also ask all the media to hear my voice, to fight for these youth
execution is enough, no to execution
Mrs. Rezaee, international attempts to prevent execution  verdicts, specially Farzad Kamangar's  verdict is underway
you know that many other honorable and freedom seeker people particularly Habibollah Lotfi
are under execution danger
what is your call up message, as a pursuing mother, in defending unconditional freedom of your child
and other captives, to the prisoners' families, and all freedom seeker people who are against execution?
in these difficult days, what is your expectation from all the people against the execution of Farzad, Habibollah Lotfi and other dear prisoners?
I expect them to give these children back to us. to set them free. all human rights activists,
campaigns, all those who hear my voice, all those who are in the way of Islam and humanity
and are talking about us and defending us, I ask all of them and the media to react in support of these prisoners
not just Farzad, there thousand other Farzads. many like Farzad are under execution verdict
many like him are under execution. I ask the international society to bring us back our children
safe and sound
Mrs. Rezaee, do you have a call up in the coming days for those who hear you
to come together, hand in hand, and support all dear prisoners and ask for their freedom?
well, I ask all of them to hear my voice on this phone and in the media
like you who have called and are fighting for these prisoners, I expect my nation, if they are human
and care about humanity should rise up and react in support of these prisoners
I am a 70 year old mother and I can do nothing
they don't answer me. ok, let the nation support me and back me up hand in hand
and take action for these prisoners
how long is this government going to put these verdicts on the youth?
why is this leader doing this to us?
if this leader is human and considers himself a Muslim, he must stop execution
and give our children back to us. I cannot speak anymore
we have heard that you have called up for a gathering on Sunday 11th of Bahman, and you've asked
everyone to take part, as a protest for the freedom of all these dear prisoners
we are all listening. you can declare it yourself that there is a gathering on this day
yes, on Sunday I want to gather in a place, along with other mothers whose children are under execution danger
and mothers who are waiting for their children, and ask the Islamic Republic, our government,
our president, our leader to set our children free and abolish execution
there must not be any other executions
if he considers himself a leader he should stop execution and killing the youth
let me tell him, if he prays to God, why is he executing  people's children? doesn't he have a son?
wont his son get stuck in a situation like this? let all the people hear me, let them ( authorities) hear me as well
I have raised this son with difficulty and I had great wishes for him
he tried and labored in dust (in classroom) for 14 years for the children of this nation
shouldn't this nation remember what he did for them?
and shouldn't they fight for these prisoners' freedom?
can they forget their labor and service for 14 years for their (people's) children?
why shouldn't they (people) cry and shout for the rights of these prisoners?
why they shouldn't  go to the president and tell him not to be cruel to his people and care for them?
thank you very much Mrs. Rezaee everybody hears your voice and we hope many people can come and unite with you for unconditional freedom of these dear prisoners
thank you very much
much obliged
Posted by RahaiZanTV at 4:10 PM No comments: 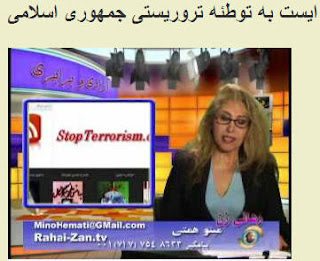 Stop the Conspiracy of the Islamic Republic of Iran

December 21, 2009
At the request of Iranian authorities, INTERPOL has labelled a number of leading members and supporters of the Worker-communist Party of Iran-Hekmatist, as criminals and terrorists and has published their pictures and personal information on their website. These individuals have been persecuted and exiled by the Islamic Republic of Iran’s (IRI) authorities many years ago due to their active role in opposition to the IRI. Therefore, we, the under signed, consider INTERPOL’s step in this regard, as a clear sign of co-operation with the IRI’s notorious Secret Police.
This move by the IRI’s secret police through INTERPOL is not the first move of this kind against opposition groups. For example, Iranian terrorist agents murdered Qulam Keshaverz, the spokes person of the International Federation of Iranian Refugees, while he was visiting her mother in Cyprus, in 1989. In the same year, Abdul-Rahman Qasemlu, the Secretary General of the Democratic Party of Iranian Kurdistan and his colleagues were murdered during a secret negotiation with Iranian officials in Austria. The IRI’s authorities’ fatwa against Salman Rushdi and offering bounty to murder him; the killing of the Japanese translator of the Satanic Versus and the attempted murder against the Italian and Norwegian translators is a dark reminders of the brutality of the IRI and the length to which it is prepared to go to eliminate its opponents.
According to reliable sources, the number of exiled political individuals who have been murdered by the IRI from 1991 to1997 are 210. In 1998 alone, 76 writers, journalists, and political activists in Iran were murdered on order of the highest Iranian authorities. All these victims were accused of the same charges as those on the list of INTERPOL.
As far as the IRI’s authorities are concerned any progressive individual, anyone who defends human rights and advocates secularism should be eliminated. If not stopped the INTERPOL should prepare itself to arrest every woman, youth and worker in Iran.
By taking sides with the IRI, INTERPOL is making the life of Iranian opposition inside and outside of the country insecure and dangerous. This institution will then be responsible for the outcome of this policy.
INTERPOL’s decision is the first step in providing a “legal” and an “international” permission to the IRI’s Secret Police to attack any opposition and their family members.
If the INTERPOL decides to continue with its collaboration with the IRI, it will face condemnation and protests not only from Iranian political and cultural activists inside and outside of the country but also a whole host of progressive individuals and organizations in Europe and North America.
Only a strong and consorted pressure from progressive forces and individuals and libertarians, labour organisations, progressive political parties, and human right advocates can stop INTERPOL’s collaboration with the IRI’s secret police. We call on all those who oppose the IRI’s terrorist policies to join us in our endeavour to foil this conspiracy against Iranian political oppositions.
To support our campaign please contact us to take coordinated action in the form of petitions, protests and rallies. You can also write letters of protest to INTERPOL and send a copy to us.
INTERPOL Address:
INTERPOL
General Secretariat
200, quai Charles de Gaulle
69006 Lyon
France
Fax: +33 (0)4 72 44 71 63
Thank You,
Abbas Samakar, Amir Hassanpour, Azad Zamani, Azadeh Sepehri, Basir Nasibi, Bahran Choubineh, Banafshe kamali, Behrouz Sooren, Jalal Housaini, Minoo Hemati, Nasrin Parvaz, Rahim Mahmoudi, Salah Irandoust, Shahrzad Mojab, Soraya Shahabi, Suliman Qasemiani, Yousef Akrami.
www.stopterrorism.org
Posted by RahaiZanTV at 11:11 PM No comments: 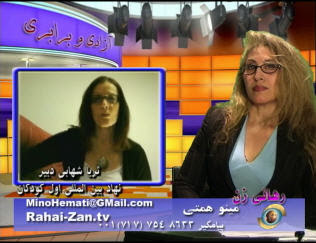 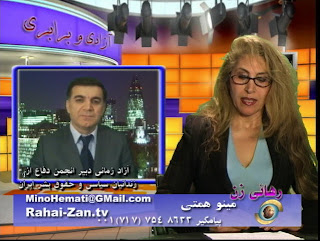 وضعيت حقوق بشر و مبارزات مردمي در سالي که گذشت، گفتگو با آزاد زماني
Human rights situation and people's struggle in Iran in 2009 is discussed in an interview with Azad Zamani by Mino Hemati anchor/ producer of Rahaizan TV program Broadcasting via Channel One satellite station to Americas,m Europe and the Middle East.
Posted by RahaiZanTV at 10:13 AM No comments: